At 1.90m (6ft 3”), and 103kg Springbok Rugby player Dewald Potgieter is more than adept around the rugby fields of the world. But Potgieter is equally as adept at understanding what he wants from a home and, as his new house demonstrates, he has a remarkable sensitivity and understanding of design and construction.

Potgieter explains his thought process behind the house he designed using Light Steel Framing (LSF): “I wanted the house to be striking in appearance, with clean square lines and many different depths and textures on any particular face. I like combining different natural elements, so I used a lot of wood, glass, steel and stone to create focal points and feature areas. I also love to entertain, so the open plan area is the hub. Everything is easily accessible from this point and it encourages and enables interaction across the kitchen, dining room, living room and patio,” he says.

Potgieter designed the house himself using 3D software on his laptop and submitted the designs to ACG Architects in Pretoria to do the official drafts.

On the question of why he decided to use LSFB Potgieter said that being an advocate of green initiatives lured him to this building method. “I believe we all have to actively play our part in implementing sustainable environmental building solutions. The fact that I could build a house that stays cool during the summer and retains its heat in the winter significantly cutting energy costs and, in addition,  takes less than half the time to build compared to traditional building methods, really sealed the LSFB deal for me,” he said. Potgieter added that the expected advantages of using LSFB certainly came to fruition. “All that I expected from LSFB from an energy-saving perspective materialised,” he says. “In fact, the only perceived negative – namely LSFB being limited from a design perspective – was disproved quite emphatically. The house is in essence a complicated design making use of big open plan areas where the spans are pretty significant and the LSFB coped very easily indeed.”

The Potgieter double-storey house comes in at just under 480m2, has four bedrooms, four bathrooms – all en-suite – his and her walk-in closets in the master bedroom, a large open-plan kitchen/dining room/living room area, separate scullery and pantry, entrance hall, triple garage, large wine cellar and domestic helpers’ quarters all on a 1500m2 stand. Large glass areas have been used to make the most of spectacular views.

“To think that the actual building time was just on six months is in itself one of the strongest recommendations for LSFB building,” Potgieter says. “I happily endorse LSFB as a financially viable and energy efficient method of building and, at the very least, I want to stimulate people to seriously look at this building method for themselves in the future.  Thinking green is not just a ‘moment with momentum any longer’ – it is a full-blown movement and I encourage everyone to participate in it.”

Potgieter said that one needs to look at the LSF as a system, where every part and/or layer plays a significant role in achieving the full benefits. “This is really where my contractor – Light Steel Innovations (LSI) – carried the torch in terms of their understanding of the craft,” he said. 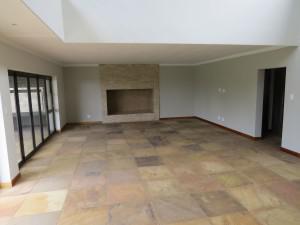 “It was a pleasure working with Riaan Swanepoel, Operations Director of LSI. We were constantly pushing the envelope on what could be done, and in the end I believe there was a perfect marriage between getting the ideas in my head to merge with his uncompromising dedication to the system,” he said.

John Barnard director of the Southern African Light Steel Frame Building Association (SASFA) says that Dewald Potgieter is one of a growing number of high profile and professional design enthusiasts who are using LSFB for a wide variety of projects.

“The ability to achieve complex and beautiful designs with LSFB is no longer in doubt and, given that LSFB also contributes to a  growing movement of sustainable and cost-effective building, the significant advantages of LSFB to individual homeowners and the environment at large, can no longer be discounted,” he concluded.

For the Potgieter house, the steel frame was supplied by Innosteel; the polystyrene and mesh by Tecnipol; the Gypsum Board and Basecoat by Saint Gobain; level screed and render by Trowel on Textures and technical support by Mulder Kruger and Jaco Richter.