The largest ultra-fresh food manufacturing facility in the Southern Hemisphere

CEO of Woolworths South Africa, Zyda Rylands and the Department of Trade and Industry (“the dti”) and the Gauteng Provincial Government officially opened the doors of In2food‘s new 22 700m2 food production facility in the OR Tambo Special Economic Zone in Johannesburg. The largest and most diverse ultra-fresh food facility of its kind in the southern hemisphere, and the second largest CO2 refrigeration facility in the world. The new Bonaero site was developed to Woolworth’s quality specifications and will create 600 new jobs. 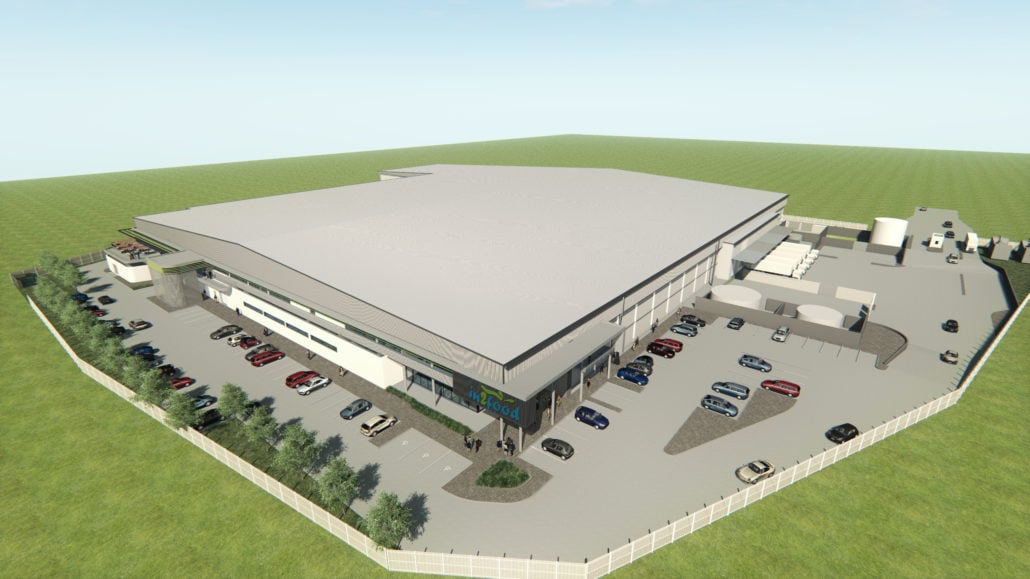 The development value of this world-class site was R400m, In2food, Woolworths (largest fresh and prepared food supplier), received over R140m from national and Provincial Government. “I am very proud to be opening this world-class food production facility. In2food has been a Woolies Food Partner for more than 28 years and this project was a natural extension of that relationship, with the shared goals of driving innovation and job creation. This facility will create 600 new job opportunities as well as additional jobs and economic opportunities across the country’s agricultural value chain. Bonaero Drive will allow In2food to expand their technical expertise as well as contribute to the development of food production industry in the country.” stated Ms Rylands.

The OR Tambo Special Economic Zone, in which the new In2food site is situated, is a multi-site development and consists of several industry-specific precincts which will be developed in phases over a 10- to 15-year period.

According to Mr Lionel October, Director General at the dti, the launch of the In2food plant is one of the strategic initiatives that will stimulate South Africa’s agriculture production, contribute to the economy of Ekurhuleni, Gauteng, and increase the country’s export earnings. The project will also help in creating much-needed jobs. Gauteng Premier Mr David Makhura said the opening of this new industrial site is another positive example of how inclusive growth and localisation of the industry should work in South Africa. “The Special Economic Zone model creates the ideal environment for investment into industrialisation. Government is committed to utilising its economic agencies as a platform to strengthen, build and localise large industrialisation programmes, creating not only jobs but thriving communities in the various economic hubs. The handover of the factory to the investor tenant, In2food is a demonstration of Government and private sector working together to successfully deliver economic development and create much-needed job opportunities. ”

Richard Cooper, CEO of In2food said, “The official launch of our new site is a major milestone for us and South Africa. This is the largest capital project ever undertaken by In2food and will create a world-class facility that will be a significant move in terms of capacity, capabilities and quality, both for In2food and our customers. With the expansion of In2food, this new facility will create 600 new jobs over the next two years helping ORT SEZ to reach its first 50% of their job creation goal which is 1200 by 2025. In2food will be recruiting within food science, production, engineering, operations and administration roles.”

Within the approximately 20,000m² processing area, is housed world-class state of the art food manufacturing equipment imported from around the world as well as quality South African equipment. As an example, the new facility will be producing 2000 litres of soup and 10,000 pancakes per hour. The In2food factory will increase the export of fresh food products from OR Tambo International to a projected 1 billion Rand by 2025.

“We are particularly proud of the facility’s sustainability credentials, being listed as South Africa’s first five-star eco-friendly industrial site. Sustainability is core to the Woolies business. This was part of our joint specifications for the site and is further testament to our shared values,” concluded Ms Rylands.

Ceiling fans are an absolute must-have in every household during the hot summer months. Most people cannot function without having a…

Ceiling fans are an absolute must-have in every household during the hot summer months. Most people cannot function without having a fan to keep the air moving, so making sure your fan is in optimal condition always is very important. At Solent, we love how, even when the days are getting…

Despite global doom and gloom, Stats SA in their latest gross domestic product (GDP) report, state that the construction industry…

Despite global doom and gloom, Stats SA in their latest gross domestic product (GDP) report, state that the construction industry in South Africa reportedly grew at a rate of 11.2% in the fourth quarter of 2020. In line with commonly held belief, these results indicate that the sector holds the…

Immerse yourself in luxury

The AXOR range of showerheads brings the perfect combination of wellness, elegance and luxury into your life. Stepping into the relaxing spray…

Immerse yourself in luxury

The AXOR range of showerheads brings the perfect combination of wellness, elegance and luxury into your life. Stepping into the relaxing spray becomes an everyday celebration that takes you away from your worries and gives you that all-important breathing room when you need it most. The shower range is available in chrome…

– the first of its kind for Africa An 11 000 sqm specialised surgical hospital development by Growthpoint Properties (JSE:…