MONSTERA DELICIOSA, VOLUME I, the first solo exhibition by Cape Town designer Porky Hefer, opened at Southern Guild Gallery on 20 November, with an old-school craft-consciousness that will appeal to a modern audience.

Sponsored by Woodhead’s leather merchants, the monumental show will premier fantastical underwater animal-inspired hanging seating environments, transforming the double-volume gallery space into a magnificent faux waterscape. From a crocodile donning avocado leather, to a puffer fish woven with Kooboo Cane, these creatures will welcome gallery visitors on an intriguing journey of discovery.

‘My pieces get people to think about nature, and its fragility, and make them consider how to protect it,’ says Porky of the nest environments with which he has become synonymous. ‘They’re also about protecting local crafts so that these traditions don’t die out.’

The six pieces featured in Monstera Deliciosa, Volume I, have been created using unique local artisanal skills that include weaving, stitching and splicing. ‘No one is playing with these skills in this way,’ explains Porky. ‘People are latching on to technology, but this evolves so quickly that it’s hard to benefit from it, because by the time you master a technological aspect it’s already dead.’

He highlights the importance of reviving and utilising traditional crafts instead, and names Cape Town cane craftsman Ismael Bey, with whom he has been working closely on his weaving projects, as a modern-day example. ‘Ismael has trained weavers at the Cape Town Society for the Blind, where I’ve had a lot of my designs produced. In this way, I use his traditional knowledge and weaving skills and subvert these into non-traditional forms, making them more relevant. We have such skilled human beings in this country, using techniques not found anywhere else in the world.’

Describing the stitching processes used in his leather pieces, which include the manta ray M.heloise, and pelican named Pelicanus Iris, Porky says, ‘We change the patterns so that different types of stitches – from a cross stitch to a saddle stitch – are used for different purposes. And there’s a beauty in all these uses, because they’re all “working”.’

Says Richard Harris, owner of Woodhead’s: ‘You can make or break a leather product in the way you put it together, and stitching adds a special aesthetic to a piece.’ 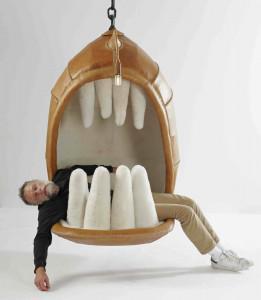 Woodhead’s, which has led Cape Town’s leather industry since 1867, up-skills leather artisans and nurtures their design and pattern-making skills. ‘Leather work is making a great resurgence, and it’s wonderful to see this craft come back in a contemporary way,’ Richard adds.

Porky’s hanging pieces are further enhanced by the ropes from which they are suspended. These are spliced, in the method traditionally used on yachts, which adds to both their strength and beauty.

Porky Hefer’s larger-than-life work has garnered extensive global recognition over the past few years, with 2015 being a stellar year for the designer. Recently returned from the Grains of Paradise exhibition at R & Company in New York, Making Africa exhibition at Vitra Design Museum in Germany, and with record sales at Design Miami/Basel in June, his nest environments are in high demand. November saw three of his pieces forming part of the Christie’s London Design Auction, in a specially curated show by the global auction house, achieving record prices in the sale.

‘Not many people are doing environmentally-inspired pieces of this nature and especially at this scale,’ explains gallery co-founder Julian McGowan. ‘Porky’s work pushes boundaries and perceptions of what art and design are, and ultimately what furniture is and can be.’ He adds that this exhibition will offer South Africans the rare opportunity to see Porky’s work in a way that international audiences have been viewing it for the past five years, saying, ‘This solo show is long overdue.’

Monstera Deliciosa, Volume I runs from 20 November to 5 February, with a preview opening on 19 November. Southern Guild will be closed from 16 December, and will reopen on 6 January.