Urgent subgrade stabilisation for a construction site access road was economically and effectively solved with Kaytech’s geotextile and geogrid at a new development for the Chamberlain Hardware Distribution Centre in Strubens Valley, Roodepoort. Eco-friendly bidim geotextile in conjunction with TriAx, the innovative geogrid developed by Tensar International (and supplied locally by Kaytech), were the products of choice to solve the problem. After discovering weak and waterlogged subgrade beneath a proposed temporary access road for plant and heavy machinery, Pierre Badenhorst Engineers approached Kaytech for a solution. The road was to be used for approximately six months and although minimal groundwater was discovered in initial geotechnical reports, significant damage was anticipated.

A subsequent site inspection by Kaytech’s Technical marketing engineer, Byron de Cramer revealed that a crushed G5 material was available but with limited information gleaned at the time, an allowable bearing capacity was determined from an assumed CBR of 3. It was decided that two different proposals were required; a 30 mm premix surface for the future parking area to be utilised by mainly light motor vehicles, and a concrete hard stand surface for the access road that in future, will form the permanent road for delivery vehicles.

Due to concerns of damage to the access road during the 6 month construction and stocking period, it was decided to split this portion of the works into two phases. Tensar was consulted to provide in-depth analysis using their software program, TensarPave to analyse the project requirements. The following layer works were specified: Layers of G5 placed over TriAx

After the initial construction of the building structure was completed Phase 2 would commence comprising a bidim A2 as separator, and a layer of TriAx 130s covered with a layer of G2 material. A 170 mm 30 mPa concrete surface would complete the hard stand area and 30 mm of asphalt premix for the parking areas.

Bulk earthworks contractor, Zero Azania, was contracted for the stabilisation of the project. Completion of the project in June 2017 saw a total of 8 500m2 of both bidim A2 and TriAx TX160 used to reinforce and stabilise the access road. The same quantities apply to Phase 2.

Kaytech’s core product, bidim is a continuous filament, nonwoven, needlepunched geotextile manufactured from 100% recycled material. During the last decade, the company’s ISO 9001 registered facility has processed and converted almost 500 million discarded plastic cooldrink bottles into 26 million kilograms of high-grade polyester to create eco-friendly, A-grade bidim that meets the most stringent civil engineering and industrial specifications. As a separator, bidim maintains the integrity of selected fill material over very low CBR subgrades, thereby allowing dissipation of pore water pressure and resulting in accelerated consolidation. Up to 50% less fill material is required when using bidim as a separation layer. Highly versatile, bidim is suitable for use in various other applications including erosion control, reinforcing earth retaining structures, subsoil drainage and as liner protection in raw water dams. 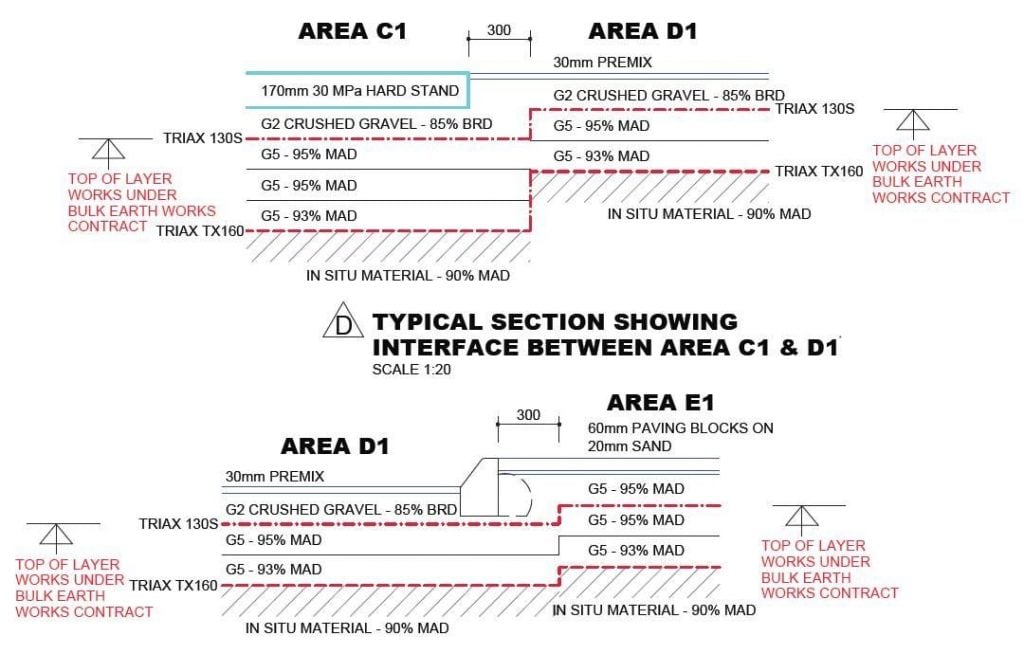 Typical of top of layer works under bulk earth works

Compared to bi-axial geogrids, the revolutionary triangular design of TriAx imparts several advantages including near-uniform stiffness through 360o as well as high junction strength and efficiency. In trafficking applications, TriAx, combined with a suitable aggregate, outperforms all bi-axial geogrids and creates a mechanically stabilised layer with near isotropic properties.

By using two advanced products, time and money were saved in rendering the access road suitable for plant and heavy machinery to reach the construction site. Bidim A2 and TriAx will also form the base for the entire permanent road network and parking areas of the Distribution Centre development. Part of the earthworks required further stabilisation due to ground water