Herolds Bay is a small, quaint seaside village in the southern Cape Province. It is known for its sheltered location and idyllic beach, that occasionally comes under attack by the sea in winter. During these months, the homes built close to the beach need protecting from the waves reaching all the way up their front doors and causing flooding and damage. Aerial shot of the Terraforce wall, 2006

The Terraforce wall in October 2019!

The existing retaining structures were structurally ineffective and not aesthetically acceptable, and the client, George Municipality, instructed the construction of an improved beach protection wall that would satisfy both structural and aesthetic requirements. The retaining wall protecting homes close to the beach

Says Paul Goedhart, Pr Eng, Tuiniqua Consulting Engineers, who conceptualised the new wall: “The old Herolds Bay beach protection wall, a combination of various materials and construction techniques, was frequently damaged during winter storms and the Municipality wanted a new uniform wall between the beach and the road which would withstand the sea forces but would also provide an accessible and aesthetic barrier. To meet these requirements a stepped reinforced precast concrete block wall was designed. The wall was founded on the underlying rock since the level of the beach sand varies due to the wave action. In so far this was possible the old wall structure was left in place.

“Where the depth of the rock level was unpractical for normal excavation the wall was built on a reinforced concrete strip footing which was founded as deep as practically possible. A reinforcement fabric was used to anchor the wall to the compacted cement stabilised backfill material behind the wall and enough drainage was provided to reduce hydrostatic pressures. The top of the wall was finished off with an in-situ concrete coping.” 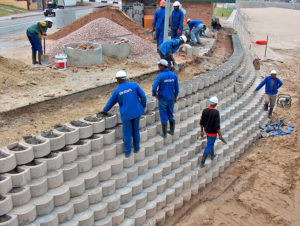 Construction of the new wall was started in April 2004 and was completed in October of the same year. During that time the team was challenged by high sea levels and high-water table.

Goedhart explains why the Terraforce retaining wall system was chosen: “Terraforce L13 blocks were chosen due to the substantial constructed mass that they offer, and 13,500 units were made with a custom-made concrete mixture – 30 MPa with a minimum of 400 kg cement per m³ of concrete – by Mobicast, Southern Cape Terraforce licensed manufacturer. The stepped wall creates an accessible interface between the beach and the roads/lawns. The blocks could also be easily secured together with reinforced concrete and the transition to ramps and stairs was easy to achieve.”

As would be the case with most challenging projects, where few dare to tread, lessons were learned. During particularly heavy storms in 2006 and 2008 some damage occurred to the wall.

At one point, where bedrock was too deep to be reached, the foundation was undermined, and a small section collapsed. The section was rebuilt on reinforced concrete caissons which were sunk down to the rock level with an added gabion/gabion mattress apron below normal beach level to prevent a new collapse.

At another section, relatively minor damage occurred as a result of the drainage behind the wall proving inadequate to deal with excessive and rapid water ingress. This was easy to fix with the section being reinstalled with better drainage measures. So far, these measures have lasted till today, weathering any further powerful storms. 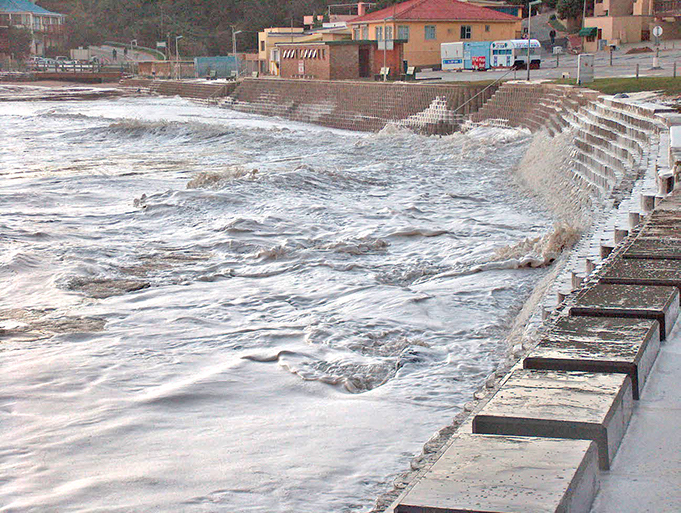 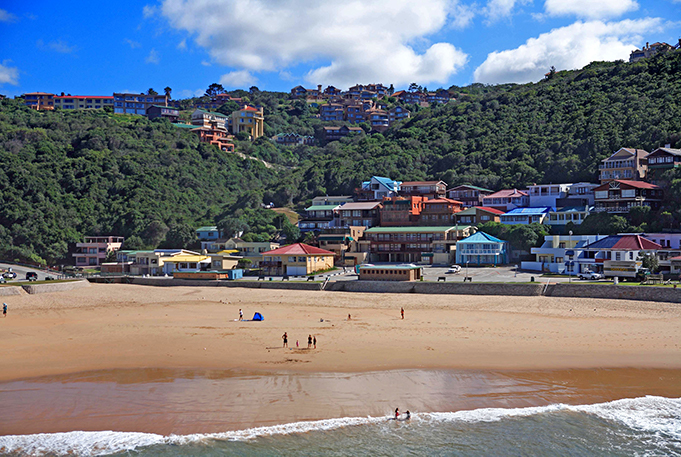 The geotechnical challenge of building on dolomite in Gauteng

The geotechnical challenge of building on dolomite in Gauteng

By Kim Timm, Executive – Structures, Buildings and Places Kim Timm (Pr Eng), AECOM A common concern in construction within Gauteng is the possibility of building on dolomite. While many structural engineers are aware of the potential hazards of dolomite, not all are aware of the variability of the material…

Despite Turftech having installed numerous FIH– (International Hockey Federation) and FIFA- (Federation Internationale de Football Association) accredited synthetic hockey and soccer pitches around South Africa, it was only in the past year that the country welcomed its first full-size synthetic rugby field constructed to world rugby standards. Durbanville Curro, the flagship Curro…

The Ekhaya Mall opened today to bring long-awaited shopping convenience to the community of Embalenhle, Secunda, in the coalfields of…